September 23-27, I was in Higashikawa Town of Asahikawa City in Hokkaido, the island farthest north of Japan's four main islands. I was working on Toby and Maiko's straw bale home, "Square One". In August, I installed sensors in the north wall. Below are photos of the boxes housing the dataloggers before and after the first coat of plaster. 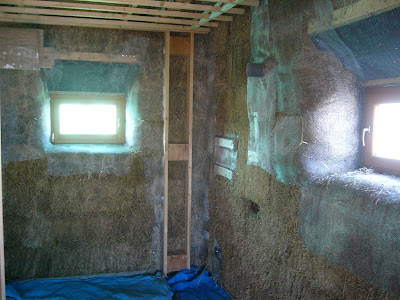 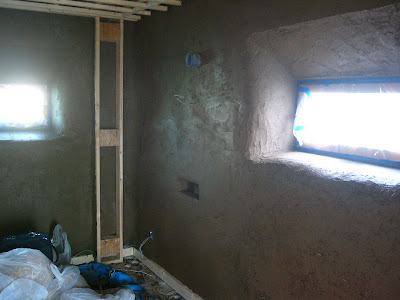 Posted by Kyle Holzhueter No comments: Links to this post

Email ThisBlogThis!Share to TwitterShare to FacebookShare to Pinterest
Labels: スクエア･ワン 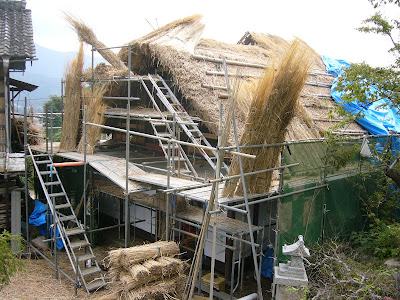 Takeru YOKOKAWA, a friend of mine who I met at the international ecovillage conference in Tokyo this past April, has just been appointed school principle of a Minka School associated with JMRA. The main teacher is 大沢匠先生(Mr. Ohsawa), a architect living and working in Kamakura. The workshop consisted of two parts, 竹小舞(takekomai) and 茅葺屋根(thatched roofing). 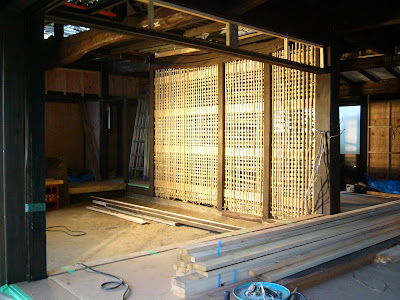 Takekomai is the wattle of Japanese earthen plastered walls. 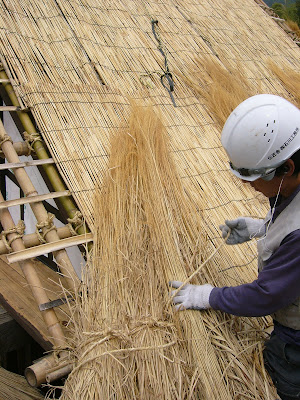 Before the second world war, many rural Japanese villages were self-sufficient in terms of roofing materials. Each individual home would cultivate its own reed field and harvest yearly. The year's harvest would be gathered and used to re-thatch one or more buildings in the community. Thatching was done as a community.
However, most of the reed fields are no longer cultivated and there are very few thatch roofers. 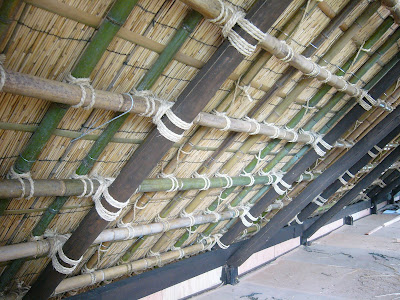 Japanese thatched roofs are framed with poles and bamboo lashed together with straw rope. 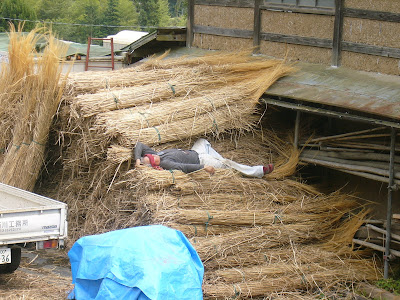 Email ThisBlogThis!Share to TwitterShare to FacebookShare to Pinterest
Labels: 民家

Travels with Ikuta-san in Chiba Prefecture 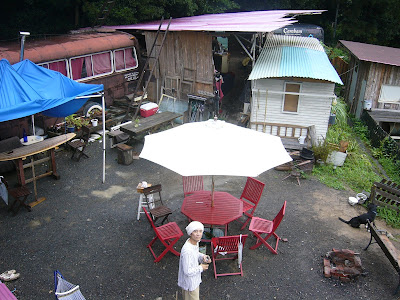 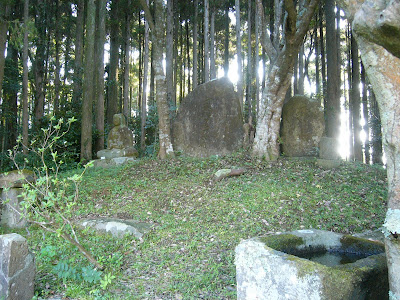 Ikuta-san and I spent the evening at "Love and Rice", an intentional community in 鴨川 (Kamogawa), Chiba Prefecture. 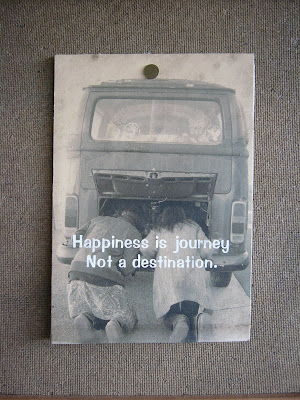 Their motto is "Life is a Journey, not a destination". Fitting for a community that began as a collection of buses and vans. 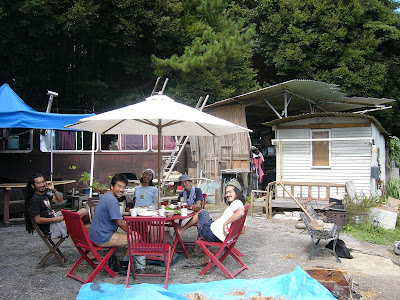 They're now in the process of building a home, and I was asked to consult and help with the production of abode. 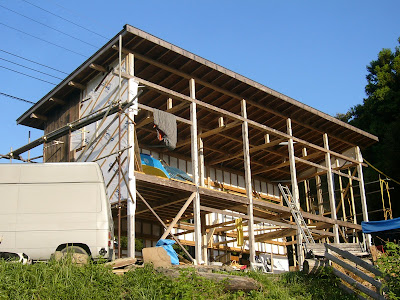 Inspired by a project in Norway called the Eco House, I've proposed the use of abode made of light-straw-clay. Light-straw-clay provides better insulation than traditional cob or adobe. It is also lighter than cob and traditional adobe, which may be more suitable for seismic zones. Light-straw-clay, having more organic matter (straw) than cob and adobe, is also more susceptible to moisture and decay, which will require greater attention to construction details. On September 16, we made test adobe of various sizes and compositions entirely from local materials within 1km. 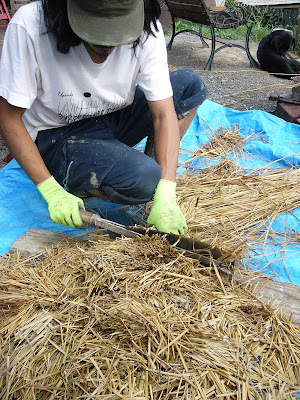 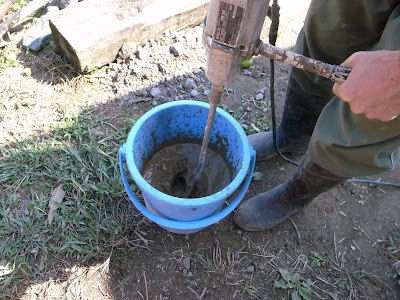 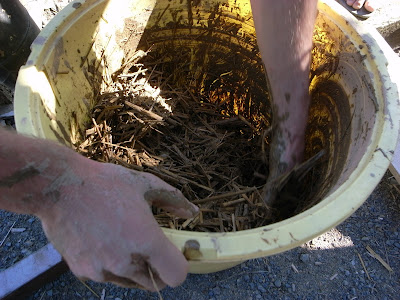 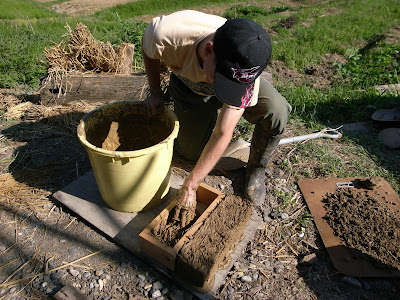 Pack into a form 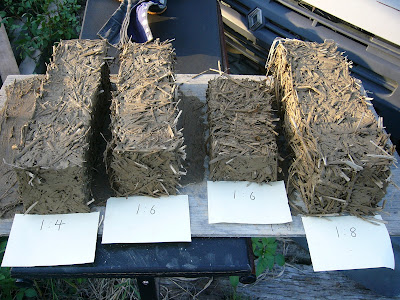 Dry
The width of the bricks was determined by the width of the framing members. Kamogawa has a heavy clay loam, suitable for light-straw-clay and rice cultivation. 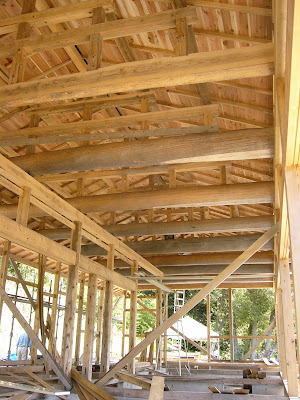 On Septebmer 16, visited the construction site of a home being built using traditional Japanese timber-framing. 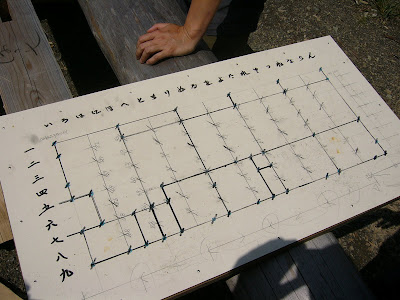 Had lunch at 鴨川自然王国 (literally, Kamogawa Kingdom of Nature), a sustainability center, cafe, and working farm founded by Toshio FUJIMOTO, leader of the "student movement", a student antiwar movement in the 60's and 70's, who's noncompliance closed universities in Tokyo. Fujimoto spent a couple of years in prison as a result. 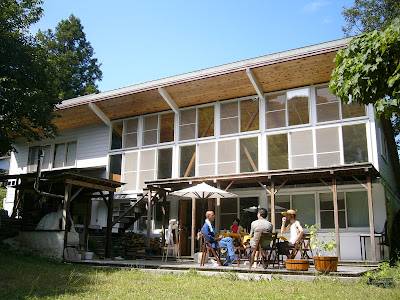 In the afternoon, visited Riko HIRATA, a carpenter by trade, but spends most of her time farming. Returned to Fujisawa late Thursday night.
Posted by Kyle Holzhueter No comments: Links to this post

Email ThisBlogThis!Share to TwitterShare to FacebookShare to Pinterest
Labels: ストロークレー 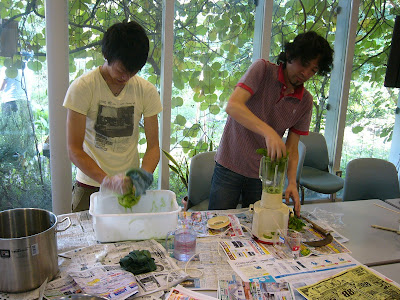 Then 5g of hydrated lime and 5g of Sodium hydrosulfite (Na2S2O4) were added for every 100ml of liquid processed indigo leaves. Apparently textiles of animal origin, such as wool and silk, don't require the hydrated lime and sodium hydrosulfite, but we were using cotton textiles. 500ml can dye approximately three handkerchiefs. Textiles are soaked in the mixture for 2-3 minutes, and then exposed to the air for 4-5 minutes. The process is repeated until the desired concentration of color is achieved. Textiles are then lightly washed in water and allowed to dry. 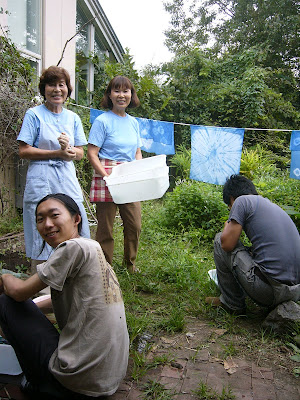 Posted by Kyle Holzhueter No comments: Links to this post 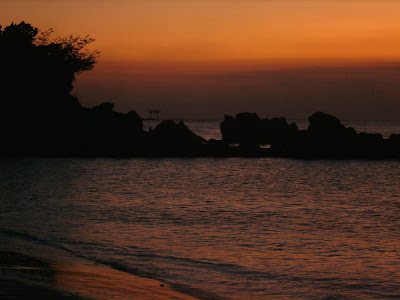 Posted by Kyle Holzhueter 3 comments: Links to this post

September 2 traveled to Hokuto City（北杜）in Yamanashi Prefecture with Itonaga-sensei and members of BeGood Cafe. In the morning visited Egao-Tsunagete（えがおつなげて), an amazing NPO reviving rural communities through sustainable agriculture and forestry. 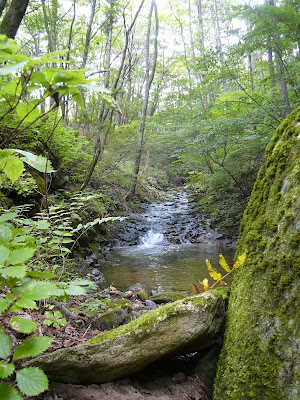 In the afternoon visited the site where Amita Corporation plans on establishing their third forest dairy operation. In Kyotango(京丹後）in Kyoto Prefecture and Nasu in Tochigi Prefecture, Amita has established organic dairy cattle and forestry operations. Dairy cattle clear under brush and the timber is sold FSC certified. 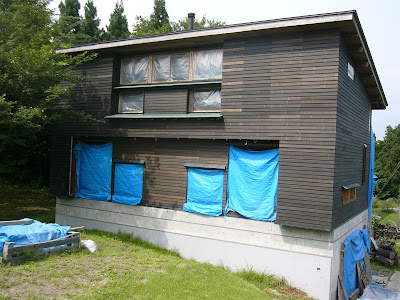 September 3 traveled to Myokokogen (妙高高原）in Niigata Prefecture, near the Japan Sea. Installed temperature and relative humidity sensors in Mr. Genzo SUGIURA's （杉浦勇二さん）straw bale home known as Warishinoya（藁石の家) http://blog.livedoor.jp/warayar9/. Warishinoya utilizes a "rain scree" to prevent rain and snow from direct contact with the straw bale and earthen plaster walls. I suspect rain screens would help reduce interstitial humidity levels in straw bale walls in Japan, but have no data to support that opinion. 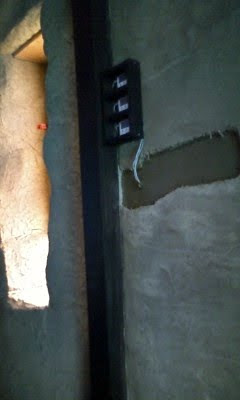 In one location, I installed three interstitial temperature and relative humidity sensors: one near the exterior plaster, one in the middle of the bale wall, and one near the interior plaster. I also measured straw moisture content at two different heights and various depths. Given that August and September are generally the months with the highest relative humidity within straw bale walls in Japan, Warishinoya had very low moisture content measurements. 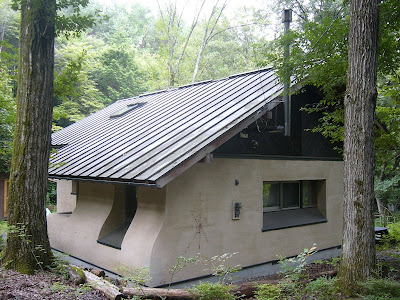 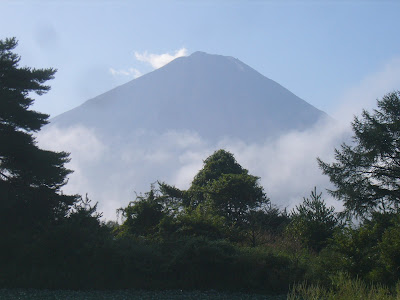 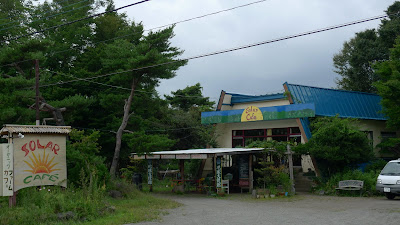 Spent the night at Earth Embassy and returned to Fujisawa on September 5.
Posted by Kyle Holzhueter No comments: Links to this post